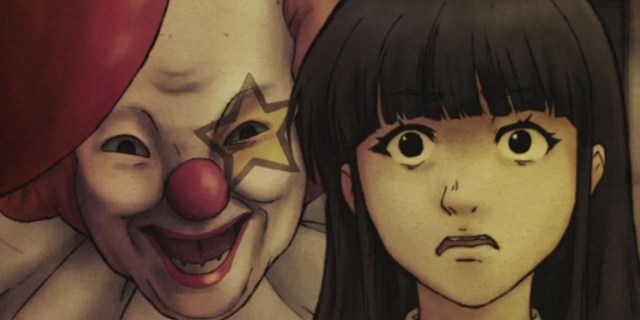 Crunchyroll is one of the biggest anime platforms in North America, hosting thousands upon thousands of titles on its service and covering everything from classic series to the latest seasonal anime. However, due to its ever-shifting catalog and the sometimes chaotic nature of anime distribution and licensing, it can often be hard to know what’s on Crunchyroll, especially if you’re looking for something specific.

But don’t worry. If the upcoming spooky season has you craving something chilling, here are the ten best horror anime you can watch on Crunchyroll this fall.

Based on the manga written and illustrated by Tomoki Izumi, Mieruko-chan was animated by Passione. The series follows Miko Yotsuya, a high-school girl who can see ghosts. These horrible spirits lurk everywhere, keen to terrify anyone they interact with. Miko, unable to get rid of her power, ignores the ghosts, presuming they can’t do anything if she refuses to pay attention to them, leading to loads of weird situations as the supernatural and the mundane collide.

A fun horror comedy, Mieruko-chan is a fun experience for those who want a more gentle horror experience.

9. The Night Beyond the Tricornered Window

Based on the manga series written and illustrated by Tomoko Yamashita, The Night Beyond the Tricornered Window is a mesmerizing fusion of horror, mystery, and boy’s love. The series follows Kosuke Mikado, a man who can see ghosts. Kosuke is terrified of these ghosts and does his best to ignore them. Trying to focus on his job as a bookstore clerk. One day an exorcist called Rihito Hiyakawa comes into the store, and Rihito learns he can enter Kosuke’s body, allowing him to see and exorcise ghosts. Rihito and Kosuke soon start working together, only to find themselves entangled in a massive mystery.

A fun blend of genres, The Night Beyond the Tricornered Window is an excellent show for those who like a little romance with their ghosts.

Based on the manga written and illustrated by Hitoshi Iwaaki, Parasyte -the maxim- has quickly cemented itself as a cult classic. The series follows high-school student Shinichi Izumi. When a race of aliens called Parasites land on Earth, they quickly start taking over the local population by entering their mouths and noses. One tries to do this to Shinichi, but he wakes up in time, and the creature ends up in his hand instead. Due to this, both Shinichi and the Parasite retain their separate consciousnesses, forcing them to form an uneasy alliance as they fight the other parasites that now want to kill both of them.

Parasyte -the maxim-  is packed full of excellent body horror, and it pairs it with a gripping plot, making it a fun watch from start to finish.

Junji Ito needs no introduction. The legendary horror manga writer and illustrator has created several legendary tales and has moved into the anime realm many times. The Junji Ito Collection contains 14 episodes that adapt several of Ito’s most famous horror tales. While fans will debate if Ito’s transcendental brilliance can be perfectly captured outside of the manga medium, this anime collection is a great starting point for those who want to dip their toes into Ito’s catalog and don’t know exactly where they want to start.

6. The Garden of Sinners

Based on the light novel series written by Kinoko Nasu and illustrated by Takashi Takeuchi, The Garden Of Sinners is a dark fantasy horror series made by Ufotable. The story follows Shiki Ryougi, a teenage girl who acquired something called the Mystic Eyes of Death Perception after an accident. This allows her to see the strings of mortality that hold the world together. However, the accident also gave her amnesia, leaving her very confused.

Shiki is then thrown into a series of supernatural mysteries that help her learn about herself and her forgotten past. A chilling thriller with some neat lore elements, The Garden Of Sinners has a fantastic and gripping atmosphere.

Based on the popular manga series written and illustrated by Kei Sanbe, Erased follows Satoru Fujinuma. Satoru has a unique ability called Revival. This ability causes him to jump back in time whenever he is in a life-threatening situation, allowing him to alter the past to avoid the incident.

However, when Satoru’s mother is murdered, he is sent 18 years into the past. This trip gives Satoru the chance to solve the mystery of his mother’s murder. It also allows him to solve a kidnapping that claimed the lives of several of his childhood friends. This dark thriller is gripping and exciting. You simply won’t be able to look away.

Based on Fuyumi Ono’s light novel series, Ghost Hunt was animated by legendary animation studio J.C.Staff. The series follows high schooler Mai Taniyama. Mai is living a quiet life until she becomes involved with Kazuya Shibuya, the manager of the Shibuya Psychic Research group. When Mai breaks one of the group’s cameras, she is forced to work with them to pay off the debt, causing her to get wrapped up in a series of supernatural mysteries. However, as these mysteries progress, Mai learns she might have unknown abilities.

A fun series with some very creepy moments, Ghost Hunt is a fantastic show for viewers who want some gentle spooks and a fun mystery.

One of the most infamous horror anime ever released, Another is based on the novel by Yukito Ayatsuji. The series was animated by P.A. Works. The series follows Kōichi Sakakibara, a young boy who joins Yomiyama North Middle School’s class 3-3 when he moves in with his grandparents. However, he soon learns that Class 3-3 is haunted by a mysterious curse. And when local people start to die in mysterious and horrific circumstances, Kōichi is forced to try and work out how to stop the curse.

Featuring some intense kills and stomach-churning sound design, Another is a terrifying experience that works on several levels. The series is packed with gore and genuinely disturbing concepts that will stick with you long after the series ends. Another is a must-watch horror series for anime fans.

Made in 2015, Kowabon is a fascinating miniseries with a unique visual style. The series contains 13 three-minute episodes, each telling a different story about a ghost tormenting someone. Each of these stories is shown via an in-universe camera, from webcams to security cameras, giving a fascinating, almost voyeuristic found-footage feeling to the show.

However, what stands out the most is Kowabon’s rotoscoped animation. This gives everything a strange vibe, as it is recognizable while also being otherwordly, and this only helps to intensify the scares, meaning each short will leave you shaken despite its short length.

Starting in 2013, Theatre of Darkness: Yamishibai has been running for over 118 episodes. Each episode of Theatre of Darkness: Yamishibai is only four minutes long, and each tells a different ghost story, many of which are based on Japanese myths and legends. This means that the show has a lot of variety with scares of all kinds, from ghosts to monsters.

What makes Theatre of Darkness: Yamishibai stand out is its visual style. It is designed to emulate the look of Kamishibai, a form of performance that became popular in the 1930s. Usually performed on street corners, Kamishibai features a narrator telling a story using a series of hand-painted wooden boards as illustrations. And the animators of Yamishibai did a fantastic job of emulating this visual style, leading to the show having many memorable scenes.

The writing is also superb, with the stories able to leave a lasting impact despite only running for a few minutes each time. In fact, the concise nature of the stories is often to their advantage, leaving the hauntings mostly unexplained, adding to the fear factor. So if you’re looking for quick scares, Theatre of Darkness: Yamishibai is just what you need.