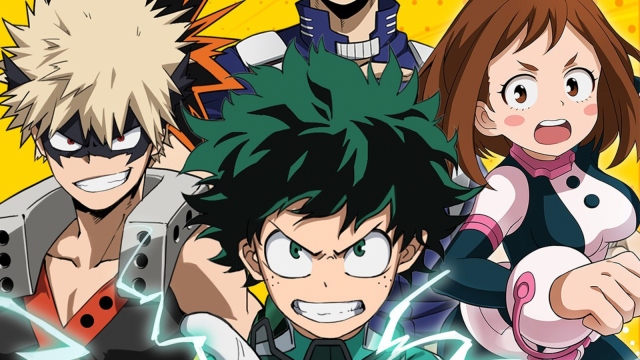 Image via Bones
Review of:

My Hero Academia first aired in 2016 and since then, the series has been on rocket boosters, becoming one of the most popular anime series of today. With its vast roster of unique characters, epic fight scenes, and original premise, it’s no surprise that My Hero Academia has caught on.

The series follows Izuku Midoriya as he strives to become a superhero despite being born with no hero powers of his own. Japan’s greatest Hero All Might sees potential in Izuku and names him as his successor, helping him to get into school for heroes-in-training.

Based on the manga of the same name that was first released in 2014, there is plenty to like about My Hero Academia. Right now is the best time to get into the series if you have yet to do so, as there is plenty of content to indulge in.

My Hero Academia has a bunch of content to get through including five seasons of the series, multiple films OVAs, and special episodes. Unlike other anime series, chronological order isn’t the ideal way to experience this show, as flashback content is better with an understanding of the characters. Given this, here is the ideal watch order for My Hero Academia.

The My Hero Academia story continues to roll on with no signs of slowing down. Now in its sixth season, the popularity of this show doesn’t seem to have taken any hits, and it has managed to maintain its spot as one of the most popular series this season. For those who are yet to start their My Hero journey, there has been no better time to do that than now with plenty to sink your teeth into.

If you’re looking to catch the action from My Hero Academia season six you can check it out on Crunchyroll now.