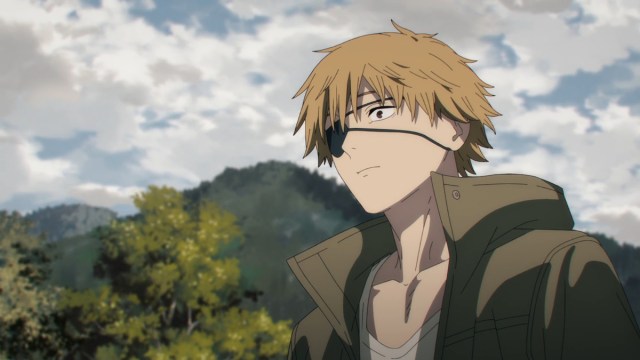 Denji in Chainsaw Man has some of the most extreme powers we’ve ever seen, and how they work is just as interesting.

Denji is a teenager who lives in Japan and to say he’s struggling to survive is putting his story lightly. He starts off as a Devil Hunter who takes jobs from the Yakuza to pay off the monumental debt he inherited from his father. The only good thing in his life is his pet devil Pochita who’s got a chainsaw in his head, which Denji uses to take care of the devils. The Yakuza boss sets him up, reveals himself to be the Zombie Devil with a horde of zombies at his command, and kills Denji. As he’s lying in a dumpster, he has a connection to Pochita and offers his owner a contract to replace his heart so that Denji can survive, and Denji agrees.

He arises from the dumpster a new young man. and Denji now has a hybrid form. He has a pull cord in his chest and when he pulls it, Denji’s arms form into chainsaws, and another chainsaw bursts from the middle of his forehead. His head becomes demonic and he’s got razor-sharp teeth meant for biting through hard matter. He is the Chainsaw Man. He can also manifest chainsaws on his legs, but if he’s lost too much blood, the chainsaw on his forehead will only partially emerge. Denji’s strong enough to kill the Zombie Devil and his hordes, and the Public Safety Devil Hunters arrive on the scene and Makima gives him the “opportunity” to join them. He does and he learns more about his powers.

In his hybrid form, Denji has increased strength. In episode three, “Meowy’s Whereabouts,” the Bat Devil throws a car at him and he’s strong enough to catch it and throw it back. He’s got enhanced durability and stamina, and Chain Entanglement which allows him to detach the chains from his chainsaw and use them as long-ranged weapons in the event Denji’s arms get torn off. The chainsaws are literally a part of him like actual body parts.

He can heal himself and regenerate his lost limbs by consuming blood, and he’s almost immortal. He’s survived barrages of attacks that would’ve killed most devils, but Denji manages to withstand immense damage. Makima tells Aki that she finds Denji promising because devils grow in power when their names are feared. “The Chainsaw Man” is likely to stir fear in others and she wants to use that to her advantage.

Denji has a devil form too. After he gives in to Makima’s wishes, Pochita takes full control over Denji and the Chainsaw Devil is revealed. His humanity is completely gone at this stage. Denji’s intestines wrap around his neck and his body turns black and hardens and which adds to his durability. Spikes grow on his shoulders and at the back of his head and he’s larger in size. He’s still got his chainsaws, but in this form, his arms split and each forearm has a chainsaw blade. It’s pretty extreme.