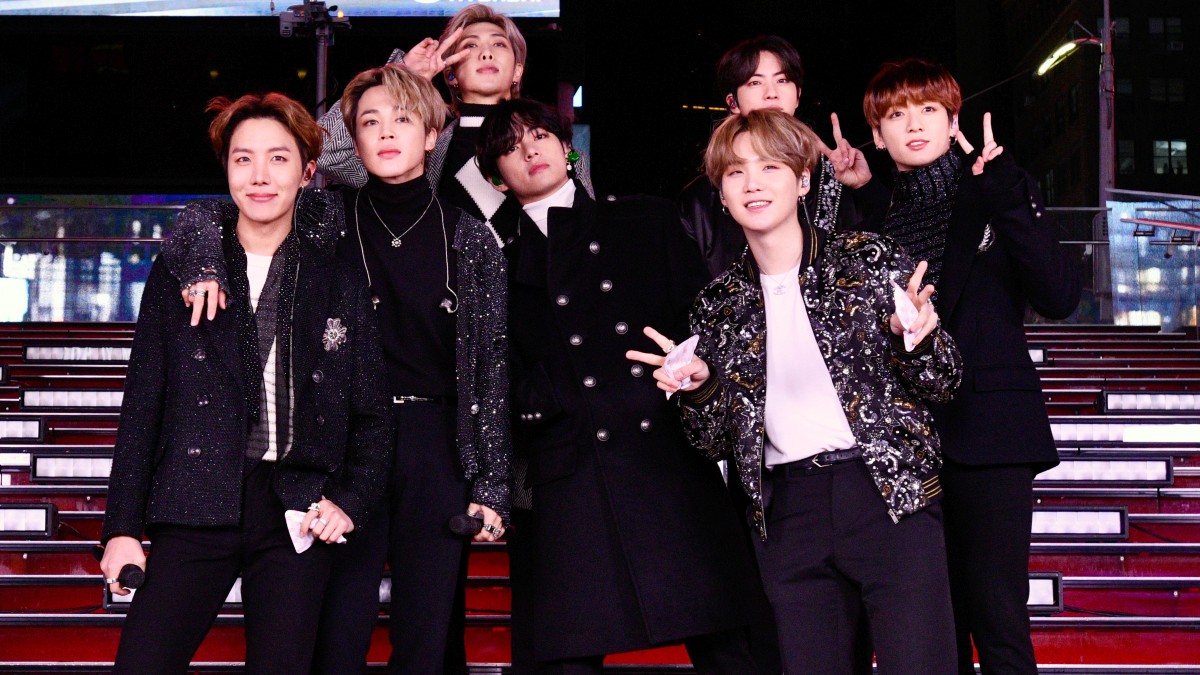 Over the years, BTS has put out a whole lot of content; way more than your typical artists. Because the group debuted with BigHit Music, which at the time was a very small company near bankruptcy, promoting BTS wasn’t easy. The band’s appearances on South Korean variety or music shows were few, with the members sometimes filling in for other acts. To compensate, the BTS members started creating and releasing their own content, giving audiences an inside look into their work, lives, personalities, and group dynamics.

As BTS grew in popularity, the members started making more TV show appearances, but that didn’t solve all their problems. RM, Jin, SUGA, j-hope, Jimin, V, and JungKook have claimed time and again how they haven’t always felt respected or comfortable in those appearances, enjoying the familiar process of creating their own web series.

A lot of BTS’ video content is released for free on the band’s YouTube channel, BANGTANTV, where fans can find vlogs, behind-the-scenes clips of music videos, performances, award shows, and other events. Nevertheless, the group has released a huge number of docu-series, docu-movies, concert films, and other web series on different platforms and in theaters, all of which new fans can find listed right here.

This variety show consisted of eight episodes aired between September and October of 2013. In it, the recently debuted BTS members joked around while parodying numerous TV shows and commercials, while showcasing a bit of themselves along the way. Fans can glimpse BTS’ old dorm, their daily activities, and get to know the members’ individual talents.

In their humble beginnings, BTS spent some time in America, practicing their singing, dancing, and rapping skills with the help of American performers. While this was a good way to broaden the members’ horizons, being in a foreign country with a huge language barrier can be scary, especially when not all the experiences are positive.

This reality show aired eight episodes from July to September 2014, on the South Korean TV show Mnet, and can now be found online.

In Run BTS!, anything goes. This web series doesn’t have a strict concept, as the only thing that matters is that the BTS members have fun, which in turn entertains their viewers immensely. From trying aerial yoga, escape rooms, fighting zombies, and playing sports, to simply gaming, anything can be fun if you do it with a chaotic group of people, which is what BTS brings to the table.

This is without a doubt ARMY’s favorite series, and it currently has over 150 episodes. While the show used to be available on VLive, it now has been moved to BTS’ YouTube channel, where it can be watched for free.

BTS GAYO is a variety series that aired from August 2015 to May 2017. In it, the BTS members did numerous activities or challenges, all related to the K-pop world. Some of these included recreating famous K-drama scenes, doing karaoke, doing K-pop quizzes, or dancing to girl group songs. As one can imagine, in a group of seven where competition runs high, it was a very entertaining show to watch, with appropriate punishments being dealt to the episode loser — and there usually was one.

The series has two seasons and a total of 15 episodes, which were all released on VLive, free of charge.

Bon Voyage is a reality series with four seasons, in which BTS travels the globe spending time together out of work and doing vacation activities. This is definitely toward the top of ARMY’s favorite web series, as they not only get to see the artists have fun, but also enjoy gorgeous sceneries.

In the first season, which premiered in 2016, viewers accompany BTS as the group travels through Norway, Sweden, and Finland. In seasons two, three, and four, the chosen destinations were Hawaii, Malta, and New Zealand, respectively.

Burn the Stage is a YouTube Red original series and marks BTS’ very first documentary content. The series follows the band during its Wings Tour, as the members travel the world for the better part of a year, performing songs from the Wings album. With Burn the Stage, fans got a candid look at what goes on behind the scenes of the performances they see on stage, and how stressful, difficult, yet exciting it all can be.

The series is a mix of concert footage and interviews, giving insights into the members’ thoughts during their biggest tour at the time. The series was released in 2018, and later adapted and released in movie format, titled Burn the Stage: The Movie.

Love Yourself in Seoul

No matter how much BTS travels and attempts to bring their performances to fans from all corners of the world, it’s simply impossible. With a concert film, however, fans can experience the magic of their performance close-up, which is exactly the goal of Love Yourself in Seoul. In January 2019, for a one-day event, ARMY from 102 countries gathered in theaters near them to see this movie. It was a memorable experience for everyone who got to attend, and due to high demand, the film made a theatrical comeback in February of the same year.

Contrary to Burn the Stage, Bring the Soul was first released as a documentary movie in August 2019. In it, the BTS members tell stories from the European leg of their Love Yourself Tour from the comfort of a Parisian rooftop. The footage, of course, is paired with recordings of BTS’ performances, as well as backstage clips from the tour. Later that month, an eight-episode docu-series of the same name was released, and it’s currently still available for streaming on Weverse.

This docu-series is a sequel to Bring the Soul as it depicts the Asian leg of BTS’ Love Yourself World Tour. The series was composed of seven episodes, released in May 2020, and available for purchase on the Weverse Shop. In September of the same year, the series was adapted into a two-hour movie format, which was released in theaters with the title Break the Silence: The Movie – Persona.

With the spread of COVID-19, BTS had to abandon Bon Voyage’s international travels, and thus, In the Soop was born. The show premiered in 2020, featuring the group on a short vacation in South Korea, taking the time to lay low surrounded by nature. In 2021, the series came back with a second season, and in 2022 with a third. However, the latter featured only one BTS member, V, with his other close celebrity friends.

In South Korea, the TV show aired on JTBC, while international fans were able to enjoy it via Weverse. Currently, In the Soop is still available for streaming on the platform.

Due to the pandemic, BTS’ Map of the Soul Tour was canceled, so the members had to get creative. On June 14, 2020, the band threw its first-ever online concert, performing songs from a variety of their albums, both new and old, and interacting with fans via a live chat.

Roughly a month later, the event was made available for streaming, on BTS’ Weverse platform, as a concert film.

With this special event, in March 2022, ARMY from around the world got to experience a BTS concert live from the comfort of a theater room. While the performance was held in Seoul in front of a crowd, it was also live-streamed in select theaters around the world for those who could not make it to the in-person event. Later, the footage was re-broadcast in the same theaters.

Yet another concert film from the band. Permission to Dance on Stage – LA showcases the BTS members giving a Los Angeles crowd the experience of a lifetime, performing recent hits like “Butter,” “On,” and “Permission to Dance” live on the SoFi Stadium. The footage was filmed across four concerts in 2021 and on Sept. 8, 2022, the film was released on streaming via Disney Plus.

BTS: Yet to Come in Cinemas

This is an upcoming concert film, made up of footage from BTS’ Yet to Come concert in Busan, South Korea. This was the band’s first free concert since their early days, and it served as BTS’ last group performance for the foreseeable future, as they now venture onto solo projects and comply with South Korea’s mandatory military duty.

The movie will debut in select theaters all over the world, for a limited time, starting Feb. 1.

J-hope in the Box

J-hope will be the first of the BTS members to get a solo documentary, titled J-hope in the Box. It makes sense, considering he was also the first to debut solo after the band announced a break from group activities.

With this documentary, viewers will get a look at the musical process behind the creation of Jack in the Box, j-hope’s first solo studio album, and a behind-the-scenes peek at the rapper’s debut performance at Lollapalooza. The documentary has a release date scheduled for Feb. 17 and will be available for streaming on Disney Plus.

BTS Monuments: Beyond the Star

BTS Monuments: Beyond the Star is an upcoming documentary series that HYBE will release in collaboration with Disney Plus. The series will contain footage from the band’s 10-year journey to global success as a group and as solo artists. Much like BTS’ previous documentaries, it’s expected that Beyond the Star will give fans a look behind the curtain at the member’s concerts, a glimpse into their thoughts, and never told before stories about their trials and tribulations. The docu-series will be available for streaming on Disney Plus.

While BTS has its group activities on hold, new fans have plenty to catch up on until they are back in action. As for older ARMY, well, surely a rewatch or two won’t hurt.