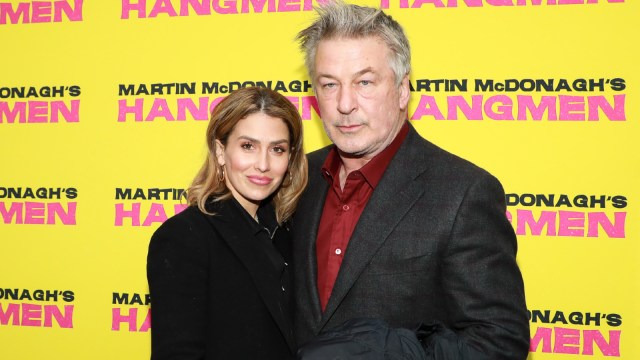 Alec Baldwin has been engaging in problematic behavior since — we don’t know, when he called his then 11-year-old daughter Ireland a “rude, thoughtless little pig” in a leaked voicemail. There have also been countless incidents with photographers, flight attendants, etcetera, etcetera. And of course, there was Baldwin’s role in the tragic killing of cinematographer Halyna Hutchins on the set of his upcoming film, Rust.

Which is all to say that Alex Baldwin needs no help in besmirching his good name, since he can never seem to stay controversy-free for very long at any given time. And yet, the 64-year-old’s wife of 10 years, Hilaria Baldwin, posted a lengthy Instagram tribute-turned-rant on Wednesday about how everybody is apparently out to get her husband, and herself by extension. Suffice to say, it is quite the wild ride.

Hilaria, who is currently pregnant with the couple’s seventh child (and Baldwin’s eighth) started out the lengthy post by expressing gratitude to her husband for becoming his “person,” being part of his world, and sharing experiences — you know, normal couple type of stuff!

But then things quickly took a sharp left turn.

“The darker part is seeing behind the curtain at how some of this ‘business’ can function and the blows and sacrifices that someone in the public eye takes for speaking up for what they believe and for helping others,” Baldwin captioned a sweet, black and white photo of the couple cuddling in bed.

It’s unclear what, exactly, she’s referring to, though it’s worth pointing out that on Monday, Fox Nation, the cable news network’s subscription-based digital platform, ran a special titled “Who is Alec Baldwin” hosted by Brian Kilmeade which we can only assume was watched by tens of boomers.

“Enemies of these missions seek to destroy you, in order to delegitimize your voice and purpose,” she wrote. “This is not a new tactic … it’s as old as history … yet, how easy it is now more than ever to slander people and cherry pick and piece together strands taken out of context, ‘opinions,’ or complete fabrications. And how some people believe it or stay silent out of fear.”

This seems like a good time to point out, without further comment, that Baldwin is currently being sued for wrongful death by the family of Hutchins over the shooting, which he continues to shirk responsibility for time and time again.

“How many times I’ve experienced people stopping you and thanking you for your philanthropy in the arts, your work with children, fighting for our environment, and yes, we all know: our politics,” Baldwin continued. “People see how hard you fight for what you believe is right. And we are grateful. Listen to these voices..turn down the volume on the darkness and negativity.”

She went on, explaining that she sees her spouse in his “dark” and “human” moments removed from his career and position as a public figure, before continuing to make even more wild claim that she has experienced “dehumanization” herself — perhaps over the fact that no small fuss has been made over the fact that the 38-year-old, who was born “Hillary Thomas” in Boston, speaks with a bizarre Spanish accent. (Notably, Baldwin once feigned to have forgotten the English word for “cucumber” in an October 2015 Today show segment.)

“I don’t know the ending to any of our stories, but I do know that while we are living, I want you to be told time over time how much we see you and appreciate you,” Baldwin concluded. “And we know that you are carrying quite a load, using the privileged place of your public voice for good. Not everyone with your privilege chooses this path. And we know it’s hard. So many love you, AB, we are here for you to lean on and feel safe.”

If Alec is serious about repairing his reputation, he certainly doesn’t seem to be trying that hard. In addition to his seemingly cavalier attitude to a woman being killed in cold blood on the set of his film by his own hands, Baldwin recently conducted an Instagram Live interview with disgraced director Woody Allen in which they waxed poetic — in between technical difficulties — about how things just aren’t as good as they used to be.

If nothing else, you kind of have to admit how impressive it is that Baldwin, who had a stretch playing Donald Trump on Saturday Night Live, is almost as universally reviled by the left as he is the right. But that could also be the shadow agents hard at work — who’s to say!