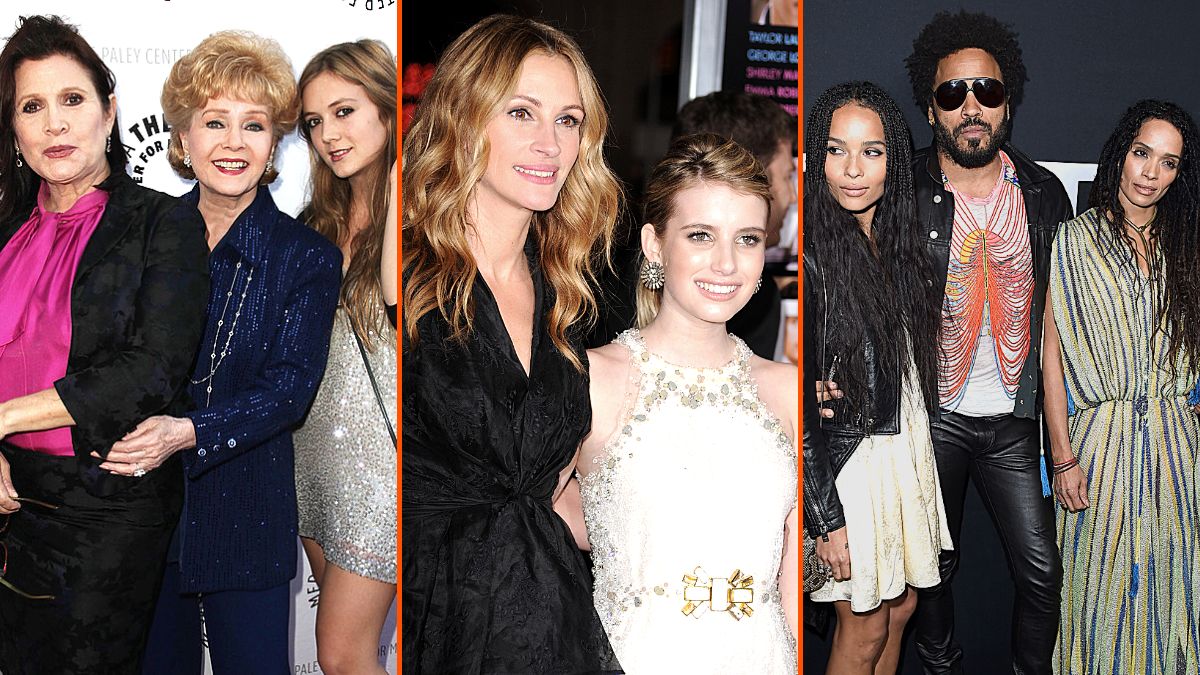 Taking over the family business has never been seen as a bad thing, but getting ahead because of your lineage isn’t exactly honorable either. Acting families are everywhere in Hollywood, and despite it being a normal progression that children might follow in their parents’ footsteps, the debate around growing nepotism in the entertainment industry has been all the rage lately.

Some so-called “nepo babies” like Jamie Lee Curtis, Lily Rose-Depp and Kendall Jenner, have even come forward to defend themselves, saying their famous relatives aren’t the reason they’re successful, but rather their hard work. Hailey Bieber, daughter of one of the Baldwins, also made a statement about it all with an incisive t-shirt.

There’s no denying, though, that that first impact — whether it is a breakout film role, or an ad campaign — is the hardest to secure, and those with connections in the industry have an easier path getting there. That doesn’t mean, however, that there aren’t famous families where every member is equally talented, and deserving of their success.

Here are ten acting families where the grandparent, parent, child, sister, brother, niece, or nephew, have all earned their respective claims to Hollywood’s highest ranks.

Like all siblings, Julia and Eric Roberts have had some ups and downs in their relationship, but the Pretty Woman actress has always been very close with her niece, and Eric’s daughter, Emma. Despite Julia being the most famous actor of the three, by far, Eric was successful in his own right before his sister’s breakout role in 1989’s Steel Magnolias. By then, the older brother had been nominated for an Academy Award for his role in Runaway Train in 1987, as well as three Golden Globes for Runaway Train, Star 80, and King of the Gypsies.

Eric has also spoken openly about helping his sister get her start in the industry, telling Vanity Fair in 2018 that “When Julia first came to New York, I went into William Morris and I said, ‘Which one of you is going to sign my sister Julia?’” A battle with drug addiction, and a difficult attitude, kept the actor from ever reaching his sister’s global fame, but he’s still somewhat of a legend in Hollywood.

As for Emma, she was practically born on a movie set, but that doesn’t take away from the fact that she’s made a name for herself since making her acting debut at nine years-old. From comedy in We’re the Millers, horror in American Horror Story, to drama in Palo Alto, the 31 year-old actress has proven talent runs in the family.

Francis Ford Coppola and daughter Sofia Coppola’s places are definitely behind the camera when it comes to the movie industry, with the two making some of the most celebrated movies of their respective generations. We still had to include them here, however, as their family tree just happens to be overflowing with acting talent. In a smaller scale, Sofia’s brother Roman, and her daughter Gia have made their mark as screenwriters and directors, as well.

Talia Shire, the iconic Adrian Balboa of the Rocky franchise, and Connie Corleone of The Godfather trilogy is Francis’ sister, while Nicholas Cage, who needs no introduction, is Francis’ nephew, the son of his and Talia’s brother August. If that wasn’t enough star power for one family tree, Jason Schwartzman, who has become one of Wes Anderson’s muses since his start in the director’s 1998 movie Rushmore, is Talia’s son. Fans will also remember Jason’s brother Robert as Mia’s love interest in The Princess Diaries.

Regardless of how helpful these familial relationships might have been in kick-starting everyone’s individual careers, no one can claim a single member of this group isn’t incredibly talented in their own right. For all we know, they would have all enjoyed great success whether or not they had been born into a completely different family.

Well, that’s a whole lot of Skarsgård, but this is one of those instances where we’re thankful for nepotism, because how else would we have gotten Bill as Pennywise or Alexander’s frightening performance in The Northman? Although Gustaf has yet to make the leap to the big screen, he has left quite the mark, as well, as Floki in the History Channel’s Vikings, among other strong roles. Their younger brother Valter has also began taking his first steps in the film and television industry, mostly working in Sweden.

As for Stellan, we all know (and love) him as the endearing Bill in the Mamma Mia! movies or the cursed “Bootstrap Bill” Turner in the Pirates of the Caribbean franchise. Yet, that’s not all for the prosperous actor who, among over 150 acting credits, also counts under his belt a stint in the Marvel Cinematic Universe, a major role in the new Dune films, and a critically acclaimed lead in HBO’s Chernobyl. Even those who don’t know Stellan have most likely seen him at some point in some movie or film, with how extensive his portfolio is.

Ultimately, Hollywood is a better place the more Skarsgårds there are in it. Even if only the future can tell if Bill, Gustaf, or Alexander will ever outdo their father, the path they have began carving for themselves already looks mighty promising.

With four generations of talented performers, the Fisher family has to be one of the most famous acting talents there is. Debbie Reynolds was one of the great actresses of her time, winning the SAG Life Achievement Award in 2014 and being nominated for awards across the board up until the late 1990s. She married singer and actor Eddie Fisher in 1955 — a marriage which ended in scandal as Eddie would later leave Debbie for Elizabeth Taylor.

Carrie Fisher, Debbie and Eddie’s daughter, defined a generation with her portrayal of Princess Leia in the Star Wars Universe and is one of history’s most beloved actresses to this day. Debbie and Carrie notably passed away within one day of each other in December of 2016.

Carrie’s daughter, Billie Lourd, hasn’t been acting for long, but her performances in Booksmart and American Horror Story have already set her among the future generation of Hollywood. Carrie’s brother, Todd Fisher, and half-sisters Joely Fisher and Tricia Leigh Fisher are all actors too, as are Billie’s husband, and father and mother-in-law. It must be one dramatic Christmas around the Fisher table.

Being part of American and even global audiences’ lives generation upon generation is no small feat. Roxie Roker was an esteemed presence in everyone’s living rooms in the 1970s and 1980s as Helen Willis in The Jeffersons. Her son Lenny Kravitz, and his wife between 1987 and 1991 Lisa Bonet, became one of the ‘it’ couples of that era, with their daughter Zöe now being one of the most famous actresses of her own.

Lenny has split his career between the worlds of music and film, with his performance as The Hunger Games‘ Cinna being the stand-out. He’s also in the Josh Duhamel/Jennifer Lopez 2023 rom-com Shotgun Wedding. Lenny’s godmother is acting legend Cicely Tyson. Lisa gained fame as part of The Cosby Show in the 90s, since adding plenty of other lesser known credits to her CV.

Arguably the most successful of her family when it comes to Hollywood, though, is Zöe, who has been booked and busy since debuting in 2007. At 34, her career already comprises acclaimed performances in Big Little Lies, The Batman, and the remake of her mother’s rom-com from 2000 High Fidelity.

It doesn’t get much more glamorous than Jamie Lee Curtis’ heritage. The daughter of Janet Leigh, whose performance in Hitchcock’s Psycho might be one of the most famous of all time, and prolific Hollywood leading man Tony Curtis (Sweet Smell of Success, Some Like It Hot, Spartacus), Jamie Lee had big shoes to fill. She was much closer to her mother, as Tony would eventually become an absent father.

Jamie Lee took over Hollywood and the horror genre in her own right, continuing her mother’s legacy as the original Scream Queen. As the infamous “final girl” of the Halloween films, Jamie Lee catapulted into the higher ranks of Hollywood, always fighting against typecasting by branching out into roles that would display the incredible acting gift she inherited. Her most recent successes include Everything Everywhere All At Once and Knives Out, which have revived her dormant, but constant career, making her one of the most coveted actors working right now, 45 years after her debut.

Jamie Lee Curtis and Janet Leigh made the ultimate horror crossover when they starred together in John Carpenter’s The Fog. Jamie’s sister Kelly also worked as an actor in the 90s.

The Levys love a good family affair. All three of them co-starred in the mega hit sit-com Schitt’s Creek, which was co-created by Eugene and Dan, and propelled the family to the forefront of entertainment. Eugene and Dan played father and son on the show, while Sarah was barista Twyla Sands.

However, long before that, Eugene Levy was building his legacy as a legendary Hollywood funny man. He first broke out in Canada as part of the Second City Television sketch show, but would later become known for his appearances in a roll of Christopher Guest comedy mockumentaries, including A Mighty Wind, Waiting for Guffman, and Best in Show, which Levy also co-wrote.

The apple definitely didn’t fall far from the tree, as Dan Levy is every bit as creative as his father. Kickstarting his career as a host on MTV Canada, the 39 year-old has since developed, as well as starred, in a number of productions, from Schitt’s Creek to his upcoming rom-com Good Grief. Besides Schitt’s Creek, Sarah is best known for playing Susan in the paranormal drama SurrealEstate.

Yet another family of actors, born out of an Hollywood ‘it’ couple, the Thurman-Hawkes have been dazzling the entertainment industry for decades. Both Ethan Hawke and Uma Thurman were two of the most in-demand heartthrobs of the 90s and early 2000s. The two met on the set of their film Gattaca, and married in 1998, later separating in 2003.

Maya and Levon are close with both their parents, frequently sharing pictures with them to their social media. Although Levon, who is 21, has also began acting, with a role in the upcoming Zoë Kravitz directorial debut Pussy Island, it’s his big sister Maya who has made the biggest splash in the industry.

The young actress got her big break as Robin in Stranger Things. The hit Netflix show made her one of the most talked-about actresses of her generation, and opened up the doors for new exciting projects where she has proven her parents’ acting genes are alive and kicking. She will star opposite her father and her mother for the first time in upcoming Beatlemania comedy Revolver, and thriller The Kill Room, respectively.