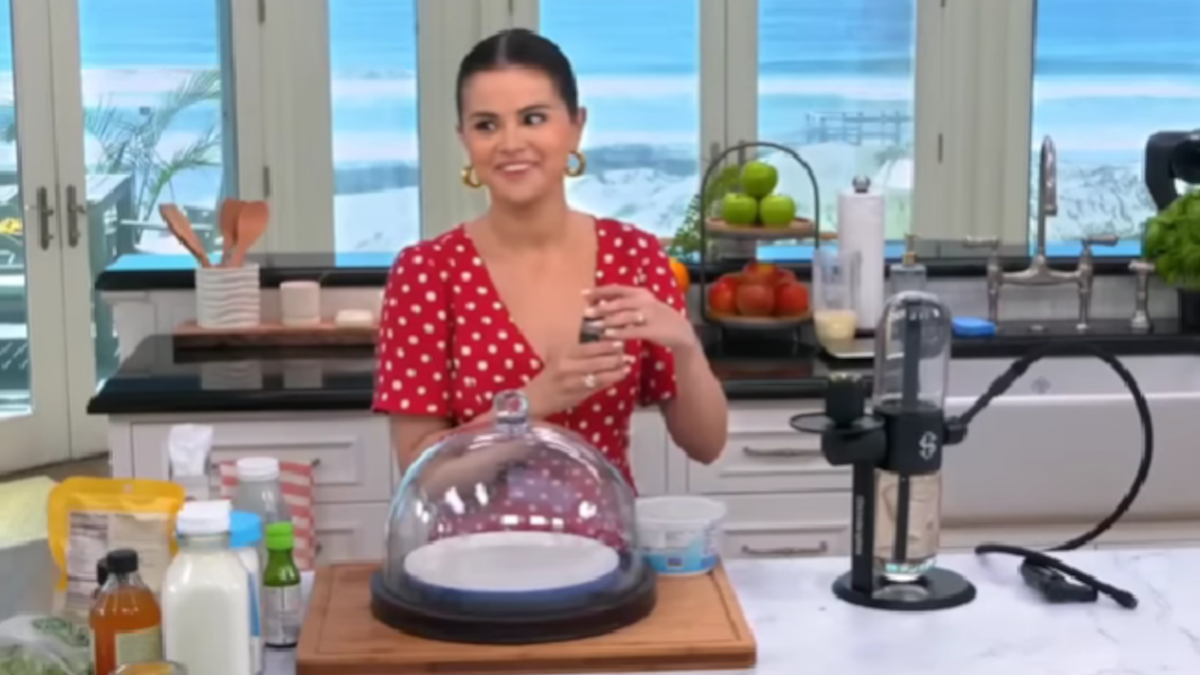 Selena Gomez has to have the most entertaining cooking show out there with HBO Max’s Selena+Chef. She is an amateur learning from a new chef every episode, and it leads to some funny situations as she is walked through some complex cooking techniques. Adding to the challenge is that the chefs aren’t always in the kitchen with her but on a screen projecting from their own kitchens.

Selena+Chef is now in its fourth season, and it has had some great culinary guests. From French chef and restaurateur Ludo Lefebvre to culinary icon Gordon Ramsay, Selena should be a pro by now, but it comes across that she’s having fun on the show while mixing up some great meals. What happened in episode two of season four was something that went beyond everyone’s wildest dreams. Imagine whipping up some good, old-fashion Greek yogurt with a gravity bong. That’s not something you hear about every day, or ever. That is until now.

Why did they use a gravity bong?

What exactly does a gravity bong have to do with Greek yogurt? It appears in this scientific equation that yogurt can be infused with a smoker attachment and an apparatus that can produce a massive amount of smoke. What better apparatus than a gravity bong? After all, that’s what they were designed to do.

Of course, this leads to more questions. Who came up with this bright idea? When did they have this ingenious lightbulb moment? It’s easy to imagine a chef hitting it one day and suddenly realizing that there are so many more uses for it than just getting high. Why not let the gravity bong realize its full potential? Shame on anyone who dares to hold it back.

Who was the chef?

Kristen Kish is the Korean-born American chef who brought this ingenuity to Selena’s kitchen. She began her culinary journey at Le Cordon Bleu College of Culinary Arts in Chicago and then went on to become the chef de cuisine at Menton in Boston. That was all before winning on Top Chef in its 10th season and catapulting her career to celebrity heights. She is the author of Kristen Kish Cooking: Recipes and Techniques: A Cookbook and currently serves as one of the presenters on Netflix’s Iron Chef: Quest for an Iron Legend.

Gomez has spread her wings since starring as Gianna on Barney & Friends in 2002 and hitting the charts with her debut single “Tell Me Something I Don’t Know” in 2009. More recently, she has been starring alongside the hilarious duo of Steve Martin and Martin Short in Only Murders in the Building. Since 2021, she’s played the role of Mabel Mora as well as being an executive producer of the show, so it was just a matter of time before Selena had her own cooking show.