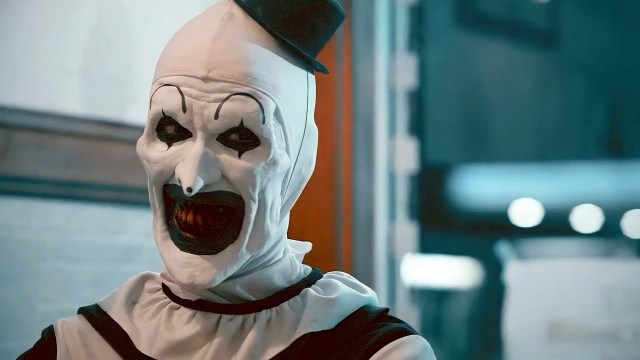 Those that have passed out, vomited, or left the theater in disgust must have been watching Terrifier 2, the sequel to Terrifier (2016), a creepy clown flick starring David Howard Thornton as up-and-coming pop-culture icon Art the Clown, a deranged serial killer. Following Damien Leone’s anthology film All Hallow’s Eve (2013), which first introduced Art the Clown to the mainstream audience, the Terrifier feature film and its sequel expanded on the character’s personality, attributes and abilities while providing gorehounds with plenty to sink their teeth into.

While the Terrifier timeline might not be too complicated, it serves to know the ins and outs of the storyline as it unfolds, especially with all the supernatural mayhem and callbacks between Terrifier and Terrifier 2. We covered Art’s origins, history, and motivations, but there’s so much stomach-churning gore and death in the Terrifier franchise that it’s understandable to lose sight of the actual plot, which can be convoluted at times and straightforward in other places. On the surface, Terrifier is a modern-day slasher that blends Stephen King’s IT with John Carpenter’s Halloween, but there’s a more sinister, sickening story at work underneath the disorienting collage of blood and guts.

Although he first appeared in All Hallow’s Eve, it was Terrifer that granted us our first introduction to Art the Clown on a more philosophical level. It was implied in All Hallow’s Eve that Art is a supernatural being with mime-like qualities who can invade people’s dreams — à la Freddy Krueger — and wreak havoc on Halloween. Terrifier follows Tara and Dawn, two friends who encounter Art on Halloween night and become his targets. Here’s a comprehensive rundown of all the important events.

Tara and Dawn meet Art the Clown for the first time

On Halloween night, Tara and Dawn leave a Halloween party and return to Dawn’s car, where they observe Art the Clown from afar. Art follows them into a pizzeria, where the pair mistake his get-up for a Halloween costume and antagonize him. Eventually, after discovering that Art has soiled the bathroom by rubbing his own excrement on the walls, the restaurant owner asks him to leave. When returning to Dawn’s car, they discover that one of her tires had been slashed.

Art saws Dawn in half with a hacksaw and shoots Tara

Tara calls her sister Victoria Heyes, aka Vicky, to come and get them. As she needs to use the bathroom, she asks an exterminator to use the restroom inside the building he’s working on. He reluctantly agrees and Tara meets a woman known as the Cat Lady, a deluded woman who believes that a doll is her child. Meanwhile, Art returns to the pizzeria, murders the owner, and abducts Dawn.

While navigating the apartment building, Tara encounters Art, who stabs her with a scalpel and drugs her. When Tara awakens, she is bound to a chair, and Dawn is revealed to be suspended from the ceiling upside-down. Art proceeds to saw Dawn in half as Tara watches helplessly. Eventually, Tara frees herself, but Art takes out a handgun and shoots Tara to death.

Art the Clown and the Cat Lady share some odd bonding moment, then Vicky arrives in the nick of time (not). Vicky is lured into the basement, where Art awaits to attack her. Unbeknownst to Vicky, who believes to have stumbled across an injured Tara, Art has mutilated the Cat Lady and is wearing her scalp and breasts. Art makes quick work of the exterminator’s co-worker and pursues Vicky, who sprints ahead only to stop and grieve upon discovering Tara’s corpse.

Retreating to a garage, Vicky gets a head-start on Art, who is knocked unconscious by the exterminator but soon reanimates and kills him. Vicky, still inside the garage, falls to the ground when Art rams through the garage doors with a pick-up truck. As Vicky lies immobile, Art begins eating her face, which is an ordeal that she miraculously survives, but is left permanently disfigured.

Shortly after Vicky is knocked down, the cops arrive to take Art into custody, but before they can apprehend him, he draws a pistol and shoots himself in the head. Art’s body, along with those of his deceased victims — including Tara and Dawn — are taken to the local morgue. When the mortician unzips Art’s body bag, the clown reanimates and kills him.

Vicky attacks Monica Brown, gouging out her eyes and presumably kills her

Although presumed dead, Vicky survives Art’s attack, albeit permanently and horrifically disfigured from it. One year later, after Vicky is rehabilitated and released from the hospital, she agrees to an interview with Monica Brown, a talk show host, thus confirming that she is the mutilated woman from the opening scene of the film. We can infer that the events of the film took place the year before Vicky attacked Monica on live TV.

On Aug. 29, 2022, Terrifier 2 premiered at FrightFest and was released in theaters in the United States on Oct. 6. Many reviews regarded the sequel as an improvement over its predecessor, despite alleged reports that viewers were passing out and vomiting from the sheer amount of gore it contains. Set a year after the events of Terrifier, the sequel focuses on Sienna Shaw and Jonathan, two siblings who are targeted by Art on Halloween night. David Howard Thornton and Samantha Scaffidi reprise their roles as Art the Clown and Victoria Heyes (Vicky), respectively. Here is another rundown, following on from Terrifier.

Shortly after ‘dying’ at the end of Terrifier, Art the Clown — the perpetrator behind the Miles County Massacre — is mysteriously resurrected in the morgue and attacks the mortician. He murders and mutilates the man with a hammer, then undresses and heads down to the laundromat to clean his blood-soaked costume. There, he encounters The Little Pale Girl, who appears to be a figment of Art’s imagination, since an onlooker observes Art playing patty cake with thin air.

Sienna and Jonathan’s father passes away from a brain tumor

Adding content to Sienna and Jonathan’s story, the sibling’s father from complications stemming from a brain tumor. Before he died, their father would experience strange visions of Art and his victims. It is assumed that the father could foretell the future in premonitions and knew when Art would strike next. Subsequently, he prophesied that his daughter Sienna would transform into a bold warrior capable of defeating Art. Jonathan had kept the father’s sketchbook, which contains sketches of Art, his victims, and Sienna’s warrior form.

One night, after working tirelessly on her Halloween costume (which just so happens to be a warrior-princess-type concept), Sienna falls asleep and dreams about Art massacring over 15 people on the set of a commercial for the “Clown Cafe.” In her dream, Art sets the banjo player on fire, which imitates a real-life fire that ignites on Sienna’s dresser, incinerating the wings for her outfit. Somehow, a sword given to her by her father remains unscathed.

All at once, Art returns and murders three individuals to continue his murder spree. Jonathan is punished for bringing a dead opossum to school, despite him claiming that Art and The Little Pale Girl were the ones responsible. Meanwhile, Sienna visits the Halloween store to purchase a new pair of wings. Inside, she encounters Art again, who antagonizes her and forces her to leave. When Sienna is gone, Art murders and decapitates the cashier.

Later that day, Art follows Sienna’s friend Allie home, where he toys with her and then breaks into her house. Art attacks and mutilates her, then when Allie’s mother returns home, he kills her too. Art uses Allie’s mother’s head as a makeshift bowl to serve candy to the children.

Jonathan is suspended for the opossum incident, meaning that his mother Barbara grounds him for the evening. Sienna attends a party with Brooke, where the latter gives her molly without her knowledge and triggers a panic attack. Meanwhile, Jonathan appears to vandalize Barbara’s car, but when she begins cleaning the mess, she discovers Art sitting in the driver’s seat. Art shoots her in the face.

When Jonathan returns home, he finds Barbara’s deceased body slumped at the dinner table with half her face caved in and Art patronizingly serving her dinner. After a struggle ensues, Art incapacitates Jonathan and transports his unconscious body to an abandoned carnival ground.

While in the back of Brooke’s boyfriend’s car, Sienna receives a distress call from Jonathan, whose voice is being imitated by The Little Pale Girl. She agrees to meet him at the abandoned carnival, where Art awaits to attack her. When she arrives, she texts Jonathan, who instructs her to come to The Terrifier attraction and find him.

Art attacks Brooke and her boyfriend, killing them both

While Sienna leaves to find Jonathan, Brooke and her boyfriend start making out and snorting cocaine. But suddenly, Brooke’s boyfriend is attacked by Art, who performs a manual penectomy on him. Brooke, while managing to flee inside The Terrifier, eventually succumbs to her injuries and struggles to fend off Art, who caves in her chest with a handmade club and eats her heart.

Sienna dies, but is resurrected by her father’s sword and decapitates Art

Sienna, while inside The Terrifier, finds Brooke’s deceased body. After a brutal fight ensues, Art manages to stab Sienna multiple times with her father’s sword and presumably kills her. After knocking her into a pit of despair (which appears to resemble a passage to Hell), Sienna drowns. However, after Art discards the sword, it begins glowing red and resurrects Sienna, who in turn decapitates Art. The Little Pale Girl arrives and leaves with Art’s head in hand.

The sole survivor of the Miles County Massacre, Vicky, whom we met in the last film, had been institutionalized for attacking Monica Brown. In a mid-credits scene, Vicky appears to have a psychotic break, wherein she mutilates her own reproductive organs and gives birth to Art’s head while a horrified nurse watches.

Hopefully, this inclusive summary about the path of terror the Clown has carved brought Terrifier fans up to speed. Both Terrifier and Terrifier 2 will be available to stream on Screambox.