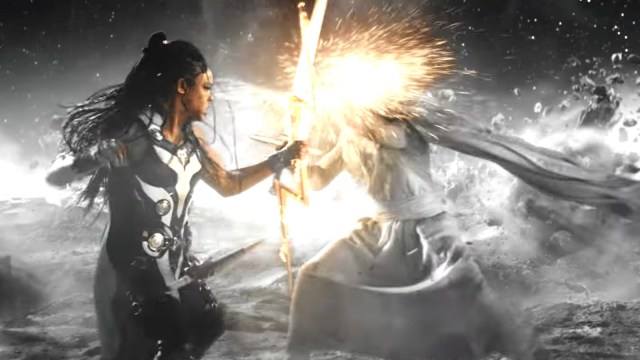 The debate surrounding the Marvel Cinematic Universe’s Thor: Love and Thunder continues to rage on as franchise fans, Odinson enthusiasts, critics, social media users, and the general public continue to discuss and dissect the latest polarizing entry in Phase Four.

Looking back, we should have expected a $200 million superhero blockbuster that was described by no less of an authority than leading man and executive producer Chris Hemsworth as a midlife crisis romantic comedy set in outer space to split opinion, but the gripes with Love and Thunder have extended far beyond the mere content of the film itself.

The haphazard tonal imbalances, rushed pacing, over-reliance on gags, the decision to cut Jeff Golblum and Peter Dinklage while retaining an extended Melissa McCarthy cameo, and some of the most inconsistent CGI you’ll ever see have all been points of contention, but at least Tessa Thompson is making no bones about what the cosmic epic is supposed to be.

During an interview with Harper’s Bazaar, the star stated the obvious by admitting that Love and Thunder “was kind of just one big messy experiment”, which is about as apt a description as you’re likely to find. Having already picked apart the underwhelming visual effects alongside Waititi, it’s nothing if not unusual to find the key creatives from what currently ranks as the biggest and most popular movie on the planet to be so open in addressing the backlash to their most recent work.

Then again, Waititi in particular loves nothing more than trolling the fandom, so he probably doesn’t care what anyone thinks.