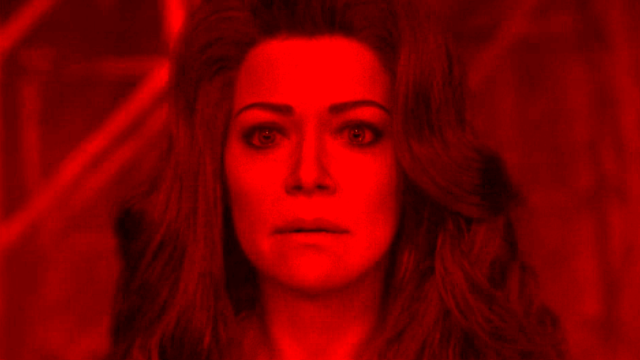 Well, that took an unexpected turn.

She-Hulk: Attorney at Law reached its penultimate episode this Thursday and, for the most part, it left fans with a huge grin on their faces thanks to the long-awaited appearance of Charlie Cox’s Daredevil, with the Man Without Fear and Tatiana Maslany’s Jade Giantess proving to be a sensational duo that we would love to see team up again in the MCU. But then, in the episode’s final five minutes, things got surprisingly dark.

Attending a gala after being nominated for the Best Female Lawyer of the Year award, Jennifer Walters is enjoying being in the spotlight for once… until the Intelligencia take over the show and reveal her private texts, selfies, and more from her phone, as well as playing a recording of her night with Josh (the Marvel fandom’s current public enemy no. 1) for everyone, including her parents, to see.

The cruel public humiliation is obviously an attempt from the Hulk-hating organization to cause Jen to lose control, and it works. As her She-Hulk side takes over, the cops arrive and the audience flees the scene in fear of what they view as a rampaging rage-monster. We’re left to wonder how our heroine is going to rescue her reputation and also make sure the Intelligencia pays for its actions.

That ending has left She-Hulk viewers stunned as they’re horrified on Jen’s behalf but also impressed that the show managed to pull of such a nimble tonal shift.

Josh better get what’s coming to him…

Death to the Intelligencia!

We need Blonsky and the Abomaste gang to help Jen get her revenge next week.

The fact that Jen is the one to pay for the Intelligencia’s violating actions is really hitting home for many viewers.

Before the show’s release, showrunner Jessica Gao teased that, alongside its sitcom-y vibes, She-Hulk would also get a little bit more serious in how Jen faces struggles her cousin Bruce never had to deal with, entirely because of her gender, and now we’re seeing that play out in a tragic way. Find out how the series concludes with the release of its finale next Thursday on Disney Plus.