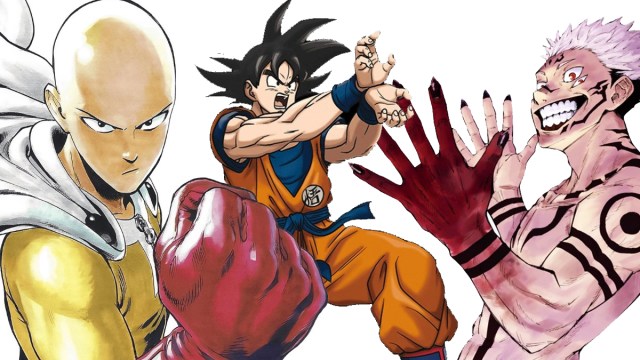 Overpowered characters are commonplace in the world of anime. Some can turn into giants, others can clean people with their saliva, yet another can shoot Ramen from their nose – odd abilities indeed. Sometimes, the main character is weak, while others are the most powerful beings in their anime. Some characters are physically powerful, while others have special abilities that make them more powerful than all the others.

The audience laughs with them, cries with them, and shouts for joy when they decimate their enemy. These are the GOATs of the anime world – the strongest, the fastest and the bravest – the greatest anime lead characters of all time. It doesn’t hurt that they’re usually also the most kind characters in their respective anime.

Exactly how strong is Pikachu? That’s one answer the anime world may never know. Forget the long list of legendary and mythical Pokémon that should be able to easily crush the electric mouse, because Pikachu and his trusty human best friend are the two most powerful beings in the Pokémon universe.

The 10-year-old boy from Pallet Town and arguably the world’s favorite Pokémon seem to destroy everyone who dares to challenge them. Theories abound, including one that suggests Ash and Pikachu are both dead – that could be one way to explain how Pikachu could defeat Tobias’ Latios or Professor Kukui’s Tapu Koko.

While most characters in the Naruto universe are superpowered, Naruto himself is the preeminent ninja in the world of Naruto. He learned extremely powerful moves from his mentor Jiraiya — such as Sage Mode and the Rasengan — but after connecting with his Nine-Tailed Beast Kurama, Naruto becomes a walking, talking weapon of mass destruction.

Ichigo Kurosaki is a teenager who can see ghosts and has difficulty determining if someone is a ghost or real person. While trying to save his sister, he becomes host to a Shinigami. With his new abilities, he saves humans from evil spirits called Hollows. While others have trained for years — even decades — to become powerful, Ichigo outperforms everyone else in Bleach.

Only the Avatar has the ability to master all four elements — Earth, Water, Fire, and Air — making him the most powerful being on the planet. While Aang is a pacifist, when it comes down to stopping a threat, he’s the one you want on your team. Aang can “bend” air, water, fire, and earth, but his ultimate ability is taking the abilities away from others.

Yuji Itadori unexpectedly becomes host to a powerful Curse named Sukuna, otherwise known as the King of Curses. Sukuna is arguably the most powerful being in Jujutsu Kaisen, with quick reflexes, durability, speed and increased strength. He can regenerate almost instantly, can manipulate fire, and he has genius-level intelligence – possibly his most powerful weapon.

Simply calling Mob’s abilities “psychic” powers would be a bit of an understatement. He’s the most powerful human on the planet, without actually fully tapping into his potential. Mob has telekinesis – the ability to move things with his mind; he can see spirits and exorcise them with a single touch; he can astral-project; and he can store up energy to provide power to his abilities, among others.

There’s only been one other character who comes close to Mob’s powers — Tōichirō Suzuki — who serves as a reminder of what Mob could become if he was evil. As powerful as Suzuki is, once Mob tapped into a small portion of his powers, he easily destroyed the villain.

4. The Disastrous Life of Saiki-K – Saiki

He is so powerful, in fact, that he has to wear a limiter device on his head to control his abilities. Without the limiter, he fears he could destroy the world. He also wears special-colored glasses that prevent him from turning people to stone.

Light Yagami has the ability to make anyone die — as long as he knows their name and what they look like — just by writing their name down in a little black book called the Death Note. The Death Note belongs to a Shinigami — god of death — who just wanted to stir up a little trouble on Earth.

Although he begins to be corrupted by the power of life and death, Light initially used the book to rid the world of evil. With the ability to kill anyone at any time, the teenager is extremely overpowered.

Like his nickname suggests, Saitama sits near the top of this list for a reason – he can knock anyone out cold with a single punch. He has faced off with powerful beings — alien and human — and always knocks them right out, which is why he’s so lonely and bored without a challenge.

While it was a toss-up between Goku and Saitama, Goku ended up taking the lead because of his ability to survive in space. If the two powerhouses were ever to face off, there’s no doubt the world would be destroyed, leaving Saitama at a disadvantage, as he would perish in space.