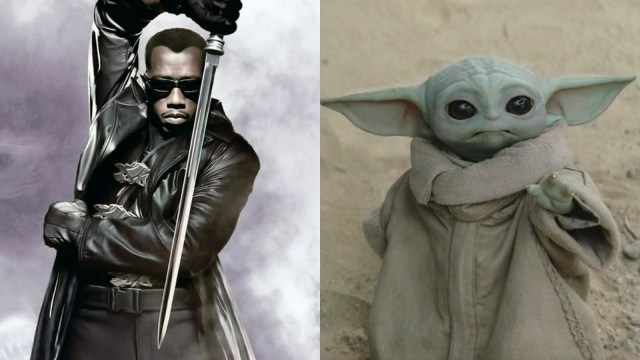 Images via New Line Cinema/Lucasfilm/Disney Plus

It seems it’s a day of missed opportunities in the Marvel universe as the much-afflicted Blade reboot has received yet another blow while we’ve learned that MCU could’ve had its own answer to the Star Wars galaxy’s Baby Yoda. Elsewhere, fans have realized the ultimate reason why Harrison Ford really does need to join the franchise and, in a shocking twist, people have decided they wouldn’t automatically say no to a crossover with one of the worst Marvel movies ever made.

After a pause on pre-production has caused the entire Phase Five slate to shift backwards, the Blade movie is not in good shape right now, but for a moment there fans were convinced they had found the right person to steer the ship back on course — namely, Werewolf by Night director Michael Giacchino. Sadly, the iconic composer-turned-filmmaker has now stressed that him taking on the project is not a possibility due to scheduling conflicts. Hey, does anyone have Spike Lee’s number?

She-Hulk‘s Son of Hulk could’ve been the MCU’s Grogu, but Marvel had other plans

Perhaps the biggest reveal from this week’s She-Hulk: Attorney at Law finale was the introduction of Skaar, Hulk’s hitherto-unknown Sakaaran offspring. Though a fan-favorite comics character, his MCU design left a lot to be desired. So we almost long for the nixed version of Skaar which would have seen him depicted as a toddler. Director Kat Coiro has revealed she envisioned him as the MCU’s own take on Grogu, but Marvel vetoed the idea as it conflicted with the grander plans for the Son of Hulk.

Rumors are steadily increasing about Harrison Ford potentially boarding the MCU to be our new General Ross in Thunderbolts. You’d expect the most exciting part of this possibility to be the notion of witnessing Ford hulk out as Red Hulk, but actually a viral tweet has found the inarguable top reason why this needs to happen: so that the famously unfiltered Star Wars legend has to face endless questions about Marvel lore during the film’s press tour. Just imagine how many instant “sad face” memes that would give us.

You’d think there would be no chance on any Earth in the multiverse that fans would want any MCU crossover with 2015’s notorious Fant4stic, and yet Redditors have actually come up with the single way that a return for one of the cast could work. They’ve decreed that Miles Teller would be welcome to reprise his role if Marvel ever adapted the Council of Reeds, a multiversal group of Mr. Fantastic variants, which could bring him together with John Kransinski and Ioan Gruffudd. You know what, we actually want to see that now.

Be sure to swing by here again on Saturday for your next daily Marvel news roundup!