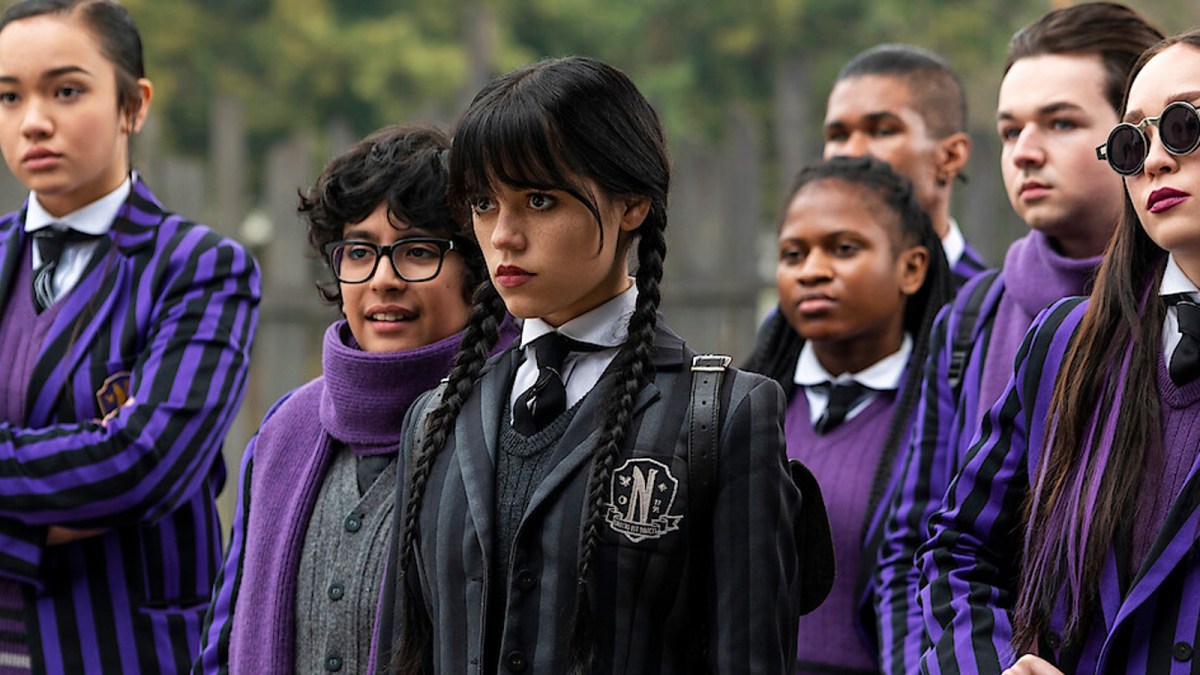 Major Spoilers ahead for Wednesday.

If you are yearning for an escape into the realm of supernatural beings laden with dark halls, fantasies, and intriguing mysteries, then Netflix’s Wednesday is the perfect watch. The show that aired on Nov. 23, 2022, created by Miles Millar and Alfred Gough, exhibits the Scream (2022) star Jenna Ortega as the titular Wednesday Addams whose transfer to Nevermore Academy marked a significant transformation in her life.

Those who have watched the show know that the school houses different supernatural beings that the audience has been familiar with in various shows in the past. As the series progressed, we get to see her interacting with a motley of supernatural creatures who, like her, are considered ‘outcasts.’

Just like Wednesday, the students possess different magical powers and throughout the series, the viewers get a glimpse of the various ‘outcasts’ of the show. Let’s compile a list of Nevermore’s outcast students.

Fans of supernatural drama or thrillers are not unfamiliar with the concept of vampires and their abilities. However, the show failed to display the powers of the vampires or them in action in any way. They are called ‘fangs,’ which is another name for vampires in the series.

Unfortunately, the viewers barely get to meet any fangs other than Yoko Tanaka (Naomi J. Ogawa), who was Enid’s roommate for a short time. Whatever screentime Yoko occupied, she was seen wearing sunglasses in bright daylight.

Unlike the daylight rings in shows like The Vampire Diaries and The Originals that protect the vampires from being burned in sunlight, it appears that Wednesday has replaced rings with sunglasses. If the show is renewed for the second season, the audience might get treated to the Nevermore’s vampires in action.

The show did not leave out one of the most powerful and popular supernatural creatures of all time, which is the ‘Werewolves.’ Even though, the viewers could not glean much information about them, the show reiterates the subject of their transformation during the full moon night (one of common mythological lore associated with werewolves).

This becomes clearer with the ordeal that Wednesday’s roommate Enid Sinclair undergoes as she is the only detailed depiction of the creature in the series. Enid’s difficulty with ‘wolfing out’ becomes the show’s vital subplot and concern arises among her parents in the fifth episode, “You Reap What You Woe.”

However, we get to see her nails turning into sharp claws whenever she gets excited or afraid. It is not until the very last episode that the viewers finally get to see Enid’s complete transformation and her subsequent fight with Hyde in that very form.

Among the pupils of Nevermore, the sirens constitute an interesting outcast species of which Bianca was the queen bee. The former nemesis of Wednesday turned into her accomplice in defeating Hyde, she possesses the power of persuasion, the ability of a siren.

They are mermaid-like creatures who use their songs to influence others’ thoughts, decisions, and actions. This manipulative ability is the cause of Bianca’s breakup with her boyfriend Xavier as suggested in the series. The sirens also possess the power to turn into mermaids underwater where their legs and hands turn into mermaid tails and razor-sharp claws, respectively.

Even though we did not get to see Bianca in that form, a glimpse of the sirens powers could be caught at the Canoe Race, where a siren turned into a mermaid and attempted to sabotage Wednesday’s approaching victory at the race.

There’s a very good reason as to why gorgons are required to cover their heads at all times, even when they’re using the mirror. The only Gorgon that we get to see on the show is Enid’s crush and love interest Ajax Petropolus.

The show also took inspiration from Greek mythology while representing the Medusa-like characters, Gorgons. They have snakes on top of their heads, a glimpse of which can turn anyone to stone.

Nevermore is filled with students with psychic abilities and Wednesday Addams is one of them. She has the power to use her visions to see past events and predict the future. She is mostly able to experience these visions after touching an object, which triggers her supernatural abilities. At the very beginning of the show, she touched her brother Pugsley, which allowed her to identify his bullies.

Later, on her way to Nevermore, she bumped into a man, an event which gave her the power to foretell his death by a car accident. Throughout the series, the viewers are introduced to Wednesday’s many visions and how she used them to contact her ancestor, Goody.

In one of her most powerful visions, which also happened to mark the show’s major twist, she unearthed the mystery of Hyde’s true identity, which was Tyler standing over Dr. Kinbott’s dead body after she was killed by Hyde. She could experience these visions after kissing Tyler, which followed a series of revelations and a deadly encounter with Hyde.

Besides Wednesday, there are other important characters whose powers bordered on psychic abilities. These include Rowan, Hyde’s first victim. He possessed telekinetic powers which he inherited from his mother, allowing him to throw objects and people around as well as the ability to experience visions, like Wednesday. In the series, he seemed to foresee Wednesday destroying the school, which caused him to almost kill her before getting brutally slain by Hyde.

Another character is Xavier Thorpe, who possesses the power to transform painted objects to life. Despite the show never thoroughly explore his powers, much emphasis was placed on his ability to predict the future through his dreams.

This placed him in the realm of suspicion when Wednesday discovered him making paintings of Hyde, which led her to believe that he was Hyde. This was until Xavier confessed his dreams about the creature.

Not unlike Xavier, Rowan, and Wednesday, Eugene is shown to have a psychic connection with the bees. His capability in manipulating and controlling the movement of the bees was manifested towards the end, when he led a swarm of bees to attack Laurel/Marilyn Thornhill, thus saving Wednesday and other outcasts from getting killed by her.

Nevermore also contains a shapeshifter and it is none other than Principal Larissa Weems (Gwendoline Christie) who was a roommate of Morticia Addams. Later, she was revealed to be a shapeshifter who possesses the ability to transform into another human/supernatural being.

It was first revealed to the viewers when she transformed into Rowan to hide his death from the public. When Wednesday confronted her about the secret, she justified her act as a necessary step to protect the ‘outcasts’ and the school’s reputation. She also used her powers to assist Wednesday towards the show’s end when Marilyn Thornhill’s identity was disclosed to the audience.

She did this by transforming herself into Tyler (who was revealed as Hyde) to lead her astray from executing her original plan. Unfortunately, this led to her demise after getting stabbed and poisoned by Thornhill.

The list won’t be complete without mentioning the series’ primary antagonist that is, Hyde, also a supernatural creature with big eyes whose acts of murdering the students at Nevermore constitute the show’s major mystery. It was not until the penultimate episode that the viewers were introduced to the identity of Hyde, who was Wednesday’s potential love interest Tyler.

In her extensive search for the details about the monster, Wednesday could barely lay hands on any vital information except that they never attended the supernatural-filled Nevermore Academy. As the series progressed, the viewers were introduced to some of the intriguing facts about the creatures uncovered by Wednesday.

These include how, unlike other supernatural beings, Hydes could not turn at his own will but needed to be guided by a mentor for their inner monster to get unleashed. It was later revealed that Tyler’s mother was a Hyde and the trait was passed on to her son.

After realizing his secret, Wednesday tried to torture Tyler into revealing the truth, causing her to get arrested and put in custody. It was then when he revealed the truth of his identity and the key perpetrator of all the mishap and murders in Nevermore, Laurel Gates or Marilyn Thornhill, who was using Tyler’s abilities to carry on with her family’s mission to wipe out all the outcasts. The identity of Hyde, Tyler’s capture, and Marilyn’s defeat continue to be counted as the show’s most memorable moments.