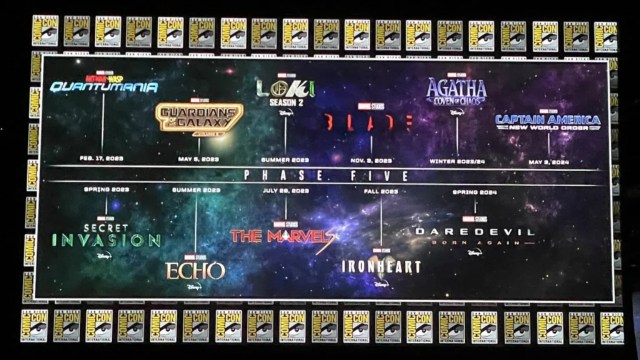 It is the dawning of a new era for the Marvel Cinematic Universe; Kevin Feige has announced the slate of films and Disney Plus series’ that will make up the MCU’s Phase Five. Feige unveiled them at the Marvel Studios Hall H panel at the 2022 San Diego Comic-Con, and he even included a tease of what’s to come, with a look at Phase Six.

Now that we have the official word as to what exactly Marvel’s Phase Five will look like, at least for now, let’s take a look at every MCU project in Phase Five, and when they are scheduled to be released.

The first of the MCU’s Phase Five is slated for release on February 17, 2023. Ant-Man and the Wasp: Quantumania will be the third film in the Ant-Man franchise, and it will be – like the previous two films – directed by Peyton Reed. Paul Rudd will be reprising his role as the titular hero, Scott Lang AKA Ant-Man, and Evangeline Lilly, Michael Douglas, and Michelle Pfeiffer will all be returning as well. New to the franchise is Kathryn Newton, who will be playing the recast role of Cassie Lang, Scott Lang’s daughter.

A large portion of the film will be exploring the Quantum Realm and it will also mark the first appearance of Jonathon Majors as Kang the Conqueror; M.O.D.O.K will be appearing as one of the main villains of the film, although his live-action actor is unknown at present. Bill Murray has also been cast in an undisclosed role.

The first Disney Plus series on this list, Secret Invasion is set to debut in the Spring of 2023. Secret Invasion will star Samuel L. Jackson as Nicholas J. Fury as he attempts to hunt down Skrulls who have been hiding out on Earth.

Ben Mendelsohn, Cobie Smulders, Martin Freeman, and Don Cheadle will all be reprising their MCU roles. They will be joined by Kingsley Ben-Adir, Olivia Colman, Emilia Clarke, Killian Scott, Carmen Ejogo, and Christopher McDonald. The series is helmed by Kyle Bradstreet and will have a total of six episodes.

The season is planned to have nine episodes, and the plot for some of these episodes has been revealed. These include an episode continuing Captain Carter’s storyline from the first season and an episode adapting Neil Gaiman’s graphic novel, 1602. We will not see the second season of the series until early 2023.

After making her debut in Hawkeye, Echo, played by Alaqua Cox, will be getting her own Disney Plus series. Echo will be debuting in the summer of 2023 and little is known about the plot of the series. We do know that the show will include Vincent D’Onofrio as Kingpin, reprising his role from Hawkeye, as well as Charlie Cox, who will be reprising his role as Matt Murdock from Spider-Man: No Way Home. The series will likely pick up where Maya Lopez AKA Echo left off in Hawkeye with Marion Dayre set to helm the project.

The second film in Marvel’s Phase Five is scheduled for release on May 5, 2023. Guardians of the Galaxy Vol. 3 is directed by James Gunn, and it will be the last time we see the lineup of intergalactic heroes in a solo outing. The film will likely pick up at the end of either their appearance in Thor: Love and Thunder, Avengers: Endgame, or the upcoming Guardians of the Galaxy Holiday Special.

The Guardians of the Galaxy team will all be returning for their third outing, but they will be joined by Will Poulter as Adam Warlock and Maria Bakalova as Cosmo the Spacedog. Chukwudi Iwuji will be playing the High Evolutionary, who was Rocket Raccoon’s creator and the alleged villain of the film.

The second season of Loki will be coming to Disney Plus in the summer of 2023. Not much is known about the second season of Loki other than the fact that Tom Hiddleston, Owen Wilson, and Sophie Di Martino, will be returning to play Loki, Mobius, and Sylvie from the first season of the series. Gugu Mbatha-Raw will be returning as Renslayer and the series will likely pick up from the end of the first season, which saw the sacred timeline split open and Loki trapped within the Time Variance Authority (TVA) base of operations, which is now ruled by Kang the Conqueror.

Next up is The Marvels, the film that will feature the much-anticipated team-up between Brie Larson’s Carol Danvers AKA Captain Marvel, Iman Vellani’s Kamala Khan from Ms. Marvel, and Teyonah Parris’s Monica Rambeau from Wandavision. Samuel L. Jackson will also be returning as Nick Fury, presumably after having dealt with the Skrulls in Secret Invasion.

The film is scheduled to be released on July 28, 2023, and will be directed by Nia DaCosta. The story will most likely address the post-credits scene of Ms. Marvel, in which Captain Marvel had somehow swapped places with Kamala Khan, presumably transporting Kamala to space.

Blade is one of the most anticipated movies of Marvel’s Phase Five, and it is currently scheduled to release on November 3, 2023. Kevin Feige announced that Mahershala Ali would be playing the titular character back in 2019. Other than the release date, a logo, and Bassam Tariq being touted as the director, not much else is known about the project.

Ali’s voice was heard in one of the post-credits scenes for Eternals — as he was offscreen — and he spoke briefly to Kit Harington’s Dane Whitman, therefore Harington might also appear in Blade.

Riri Williams, also known as Ironheart, is set to make her debut in Black Panther: Wakanda Forever, played by Dominique Thorne. She will then return in the fall of 2023 in her own Disney Plus series, Ironheart. Furthermore, Ironheart will consist of six episodes and the series will be helmed by Chinaka Hodge. Anthony Ramos, Harper Anthony, Alden Ehrenreich, Lyric Ross, and Manny Montana have also been cast in the series.

Ironheart is a young girl and a mechanical genius, and she makes her own replica of the Iron Man armor. Even though she will appear in Black Panther: Wakanda Forever, we are not currently aware whether or not the film will cover her origins and if the events of Ironheart are set before or after Wakanda Forever.

One of the few characters to be introduced in Wandavision, Agatha Harkness will be getting her own Disney Plus series in Marvel’s Phase Five. The series recently had its name changed when it was teased at San Diego Comic-Con and is now known as Agatha: Coven of Chaos, which is slated for a release in the winter of 2023/2024 on Disney Plus.

Agatha was played by Kathryn Hahn, who is set to reprise her role in the series. It is currently unknown as to when the series takes place and whether or not it is before or after Wandavision. The series could see Agatha break out of the magic stronghold that Scarlet Witch had trapped her in; after all, she seemingly died at the end of Doctor Strange in the Multiverse of Madness, along with the destruction of the Darkhold. Alternatively, it could be a prequel that shows her misadventures as an evil witch after the events in Salem, which were shown in a flashback in Wandavision.

Perhaps the most anticipated series of Marvel’s Phase Five is Daredevil: Born Again, which is slated for a spring 2024 release. Fans of Netflix’s Daredevil were not sure if they would get another turn with this character, but Marvel came through. Charlie Cox will be reprising his role from the Netflix series as Matt Murdock AKA Daredevil and is slated to appear in Echo — as is Vincent D’Onofrio, who will also be reprising his role as Wilson Fisk AKA Kingpin.

The series is slated for a total of eighteen episodes, the longest of any Marvel Disney Plus series so far. Matt Corman and Chris Ord are set to helm the series and there is currently no word on whether any of the other actors from the Netflix series will reprise their roles. Daredevil: Born Again is a direct reference to the comic book of the same name by Frank Miller, but any official word on an adaptation of the source material has not been confirmed.

The fourth entry in the Captain America series of films is slated to hit theaters on May 3, 2024. Captain America: New World Order will star Anthony Mackie as Captain America, continuing his storyline from Falcon and the Winter Soldier. We don’t have any word as to who the villain of the film may be or which supporting characters might return, but we do know that Julius Onah is attached to direct.

The film to cap off Phase Five and perhaps the film most shrouded in mystery is Thunderbolts, which is slated to release on July 26, 2024 with Jake Schreier attached to direct. We currently have no idea who is in the cast; the Thunderbolts in the comics were always a group of villains or anti-heroes and lately, Marvel has been leaving their villains alive, so we might see some of them in the film.

For example, in Falcon and the Winter Soldier, Valentina Allegra de Fontaine was introduced, played by Julia Louis-Dreyfus. She may be forming the Thunderbolts team with John Walker as U.S. Agent. Other characters that have appeared in the MCU and may return for the film include Abomination, Helmut Zemo, Yelena Belova, Ghost, and maybe even Agatha Harkness.

That makes thirteen projects in the MCU in just over a year and a half. It seems with Marvel barrelling through at full force, 2023 and 2024 are going to be great years for Marvel fans.

The next MCU Disney Plus series to release will be She-Hulk: Attorney at Law on August 17, 2022, with the next film being Black Panther: Wakanda Forever, which is set to release on November 11, 2022. Phase Five begins with Ant-Man and the Wasp: Quantumania on February 17, 2023.