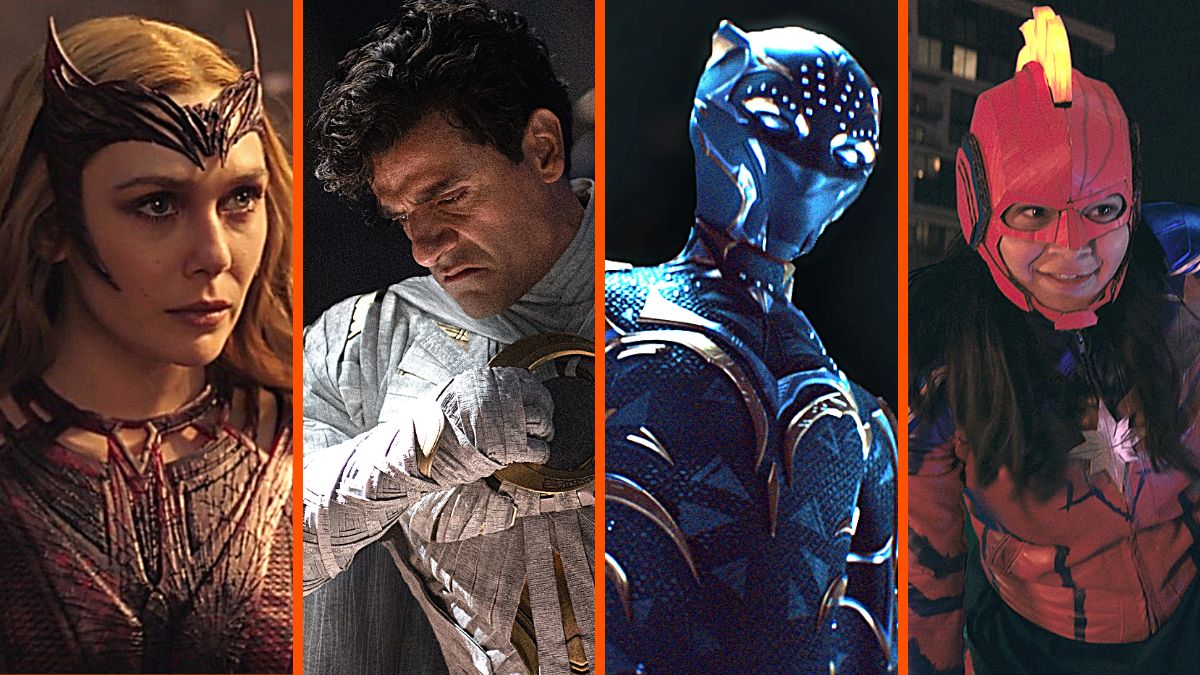 The Marvel Cinematic Universe‘s Phase Four might be among the lowest-rated phases of the franchise so far, but that doesn’t mean there weren’t plenty of iconic moments making us all collectively geek out throughout. If 2021 gave us the Spider-Men reunion we won’t soon forget, Sam Wilson as Captain America, and the reveal of Jonathan Majors as Kang, then 2022 didn’t trail too far behind, either.

Among some misses like the universally disliked Thor: Love & Thunder, and some split opinions over She-Hulk: Attorney at Law and Doctor Strange in the Multiverse of Madness, 2022 was still a pretty great year to be a Marvel fan. As a reflection of the MCU’s most contentious phase yet, this list is also likely to not reflect everyone’s opinions.

As we gear up for the grand opening of Phase Five and the ushering in of the Kang Dynasty with Ant-Man and The Wasp: Quantumania, premiering in February, here is a look back at the greatest gifts Marvel gave us in the year that’s just wrapped up.

We are all pretty thankful Kevin Feige listened to the #SaveDaredevil rallying cries and decided to resurrect the Devil of Hell’s Kitchen out of his Netflix-colored ashes.

As one of the most popular superhero casting choices of all time, the return of Charlie Cox as Matt Murdock/Daredevil was much anticipated. The little taste we got in Spider-Man: No Way Home was nowhere near enough to quench the thirst, but thankfully She-Hulk was there to save the day and keep us hydrated until the premiere of Daredevil: Born Again coming next year.

Even if She-Hulk isn’t the most uniformly popular show Marvel has produced, most fans seemed to love the different take on Matt, who appeared much more playful and relaxed as he teamed-up with Jennifer, in more ways than one. And who could forget the absolutely hysterical walk of shame, which has since become the internet’s favorite meme?

We’re also thankful James Gunn had the connections to officially make Kevin Bacon part of the MCU canon. Although the price of probably never having the actor play a superhero in the franchise in the future is a steep one to pay, it was worth it to see him portray himself, and Peter Quill’s own personal superhero, in The Guardians of the Galaxy Holiday Special.

This new television special format, which also gave us the acclaimed Werewolf By Night in 2022, was a winning bet for MCU, allowing fans to check in on new or returning characters without the commitment of either a full feature, or several episodes. It also allowed Gunn to have even more fun than he usually does with his projects, what with dedicating around 10 minutes of screentime to Dave Bautista’s Drax the Destroyer, and Pom Klementieff’s Mantis chasing Kevin Bacon around with a giant candy cane and a Christmas elf-shaped balloon.

Black Panther: Wakanda Forever was possibly the most eagerly awaited project of Phase Four following the untimely death of star Chadwick Boseman, which led to a complete script rewrite, and the obvious question of T’Challa’s future. A recast was out of the question, which meant either removing Black Panther from the MCU altogether, or picking a successor to wear the suit.

Rumors flew about who could be the next Black Panther, from Nakia to a resurrected Killmonger, but in the end there was only one right answer: T’Challa’s feisty little sister Shuri. Shuri’s journey towards becoming Black Panther in Wakanda Forever was co-written beautifully by Ryan Coogler and Joe Robert Cole, as she dealt with grief, expectations, and the looming threat of Tenoch Huerta’s Namor and his mighty underwater kingdom of Talokan.

She-Hulk: Attorney At Law brought a whole new tone and style to the MCU with its witty banter, eccentric humor, and especially the constant breaking of the fourth wall – directly inspired by the comics. Series creator Jessica Gao used this narrative device to communicate directly with the audience as she attempted to predict their reactions to different plot points and twists, eventually acquiring an even deeper meta layer when the show decided to tackle online haters and trolls.

The last episode, however, took it even further, by having Jennifer Walters quite literally smash into the Marvel studios to have a word with the writers of her own show, not best pleased with the direction the finale was heading in. She had a chat with K.E.V.I.N., the robot version of real-life Marvel exec Kevin Feige, and asked all the important questions, including when exactly we’d be seeing the X-Men in the MCU. Among a not-always successful show, this entire sequence easily made up for some of its shortcomings to become one of the most memorable of Phase Four.

It was too hard to pick just one moment from Elizabeth Olsen’s performance as Wanda Maximoff/Scarlet Witch in Doctor Strange in the Multiverse of Madness. We even dare say she was the very best thing about the Sam Raimi-directed movie, which ended up mostly falling short of fans’ expectations.

Whether it was during hyper-emotional scenes with Wanda’s children Tommy and Billy, powerful face-offs like when she literally turned John Krasinski’s Mr. Fantastic to spaghetti, downright terrifying moments like that chase sequence, or her frightening ultimatum at Kamar-Taj, Elizabeth Olsen didn’t miss a single beat throughout the whole horror-influenced film.

Kamala finds out she’s a mutant

Everyone is dying to see the X-Men finally come into the MCU, and while there have been a few nudges in that direction, none have made the splash that this Ms. Marvel reveal did. As the last episode of the show’s first season came to an end, Kamala’s best friend Bruno told the teenage superhero that the possible source of her superpowers was some kind of mutation in her genes.

Although this plot twist massively diverges from the comics, where Kamala is an Inhuman instead, it still came as a welcome surprise that the light-wielding teenager might be the very first mutant in the MCU. The future is brimming with possibilities for Kamala as we head into The Marvels, where she will be teaming up with Carol Danvers and Monica Rambeau, coming later this year.

Also setting the events of The Marvels into motion was that cheeky Brie Larson cameo in the post-credits scene of Ms. Marvel, that sees Carol mysteriously land in Kamala’s room, which just happens to be covered with Captain Marvel memorabilia.

Marvel has always excelled at crossing over between different projects to tease future events, making fans excited for what’s to come, and helping with the long wait. To have such a high-profile cameo in one of the studios’ Disney Plus shows made the universe feel better intertwined and integrated, especially given Ms. Marvel‘s importance in setting up the upcoming The Marvels.

Marc and Steven have a third personality

Disney Plus’ Moon Knight was one of the fandom’s favorites in 2022 for the distinct, darker style it brought to the MCU. Starring Oscar Isaac, the show delved into the mythos behind one of Marvel’s most obscure characters.

At the center of it all was Steven Grant, a passive British Museum worker. As the show progresses and we see Grant struggle to understand the strange occurrences taking place around him, we come to learn that he is actually an alternative personality of mercenary Marc Spector, created as an escape from his childhood trauma.

The big reveal however, happens at the very end of the show when we find out that Marc had a third personality all along, Jake Lockley, a deathly, ruthless cabbie who, unlike Spector and Grant, is still serving as Khonshu’s avatar. Although the existence of Lockley explains a lot of the things that were still confusing viewers about the show, it also generates an equal amount of questions for a possible second season, which Isaac seems to be up for.

The Guardians of the Galaxy Holiday Special did justice to its title. There were plenty of special, heartwarming moments in this Christmas mini-film among our favorite family of cosmic misfits. While Peter was missing Gamora and Earth’s Christmas traditions, Mantis and Drax decided to give him Kevin Bacon as a present. And yet, that was not the best Christmas gift featured in the TV special.

Nebula gave Rocket Bucky’s vibranium arm for Christmas, and we’re struggling to think of a more perfect choice. A known robotic body parts lover, Rocket had been coveting the Winter Soldier’s arm ever since the two teamed-up in Avengers: Infinity War. Despite her hard – and also partially robotic – exterior, Karen Gillan’s Nebula has always been a softie on the inside, and this delicious throwback reference, that only the most avid of MCU fans picked up on, only serves as further proof.

Okay, this moment might not have had the most world-changing consequences or carry the biggest stakes in Marvel’s 2022 installments, but just having Megan Thee Stallion show up in She-Hulk in the first place is more than enough to earn a place on this list.

The Houston rapper is one of the hottest musicians of her generation, and her cameo in She-Hulk was one of the show’s many hilarious details, perfectly crafted for pop culture’s current landscape. After appearing as one of the many faces of an Asgardian shapeshifter, the artist played herself in the courtroom and then later as she hired Jennifer Walters to be her new lawyer. The two celebrated the partnership with a twerk session to the sound of Megan’s “Body,” and whatever the haters say, it can’t get much better than that.